sandymg
AO3 Link: https://archiveofourown.org/works/26955184
Summary: Of course the fans loved seeing Sam with Thor's Hammer in the montage of hunts Mrs. Butters steered them toward. But I wanted to know what the heck they were hunting that required that much firepower...

I rewatched all 13 episodes of season 15 Saturday to prepare for October 8, and had some thoughts, mainly that there are some good episodes and good parts of episodes but there is so much wasted screen time and non-logical action that I’m struggling with dread over what the writers are doing to the last 7 episodes…

So sharing my thoughts after watching till 4:30 am…

hells_half_acre did her rewatch of 'Lebanon' and it reminded me of the question I had when the episode aired.

John had arrived from 2003, two years before the pilot. Sam and Dean clearly gave him a recap of what had happened--here is John's summary: "So I went out taking out Yellow Eyes?...So you saved the world?" Dean: "More than once." John: "Then it's all true. God, the Devil, you boys smack in the middle. Now you live in a secret bunker with an angel and Lucifer's kid." The must have mentioned God and the Darkness because later Dean says that if John doesn't go back to the past  "...without everything we did--with God, the Darkness..." Mary won't exist.

So just how much did they edit what John missed?

They got the Colt
John was possessed by Yellow Eyes
Dean almost died in the car crash in the aftermath
John made a deal to save Dean
YED revealed Sam had been fed demon blood in a plot to make Sam free Lucifer
Sam was killed by another demon-blood-fed child
Dean made a deal for Sam's life
Dean went to Hell
The angel Castiel rescued him
Sam accidentally  freed Lucifer (because he was manipulated by a demon and drinking demon blood--pretty sure that was edited out of what John was told)
Michael and Lucifer wanted Dean and Sam to be their vessels to start the Apocalypse
Sam jumped in the Cage with Lucifer to prevent it
Sam came back from the Cage soulless, but Death resouled him
Castiel let the Leviathans out of Purgatory
In getting rid of them, Dean ended up in Puragtory for a year
Grandpa Henry traveled through time and died helping them fight a Knight of Hell, Abaddon (So John's dad didn't really abandon him)
BTW Henry Winchester was a member of a secret society, The Men of Letters
They ended up in the bunker because Sam and Dean are legacies from Henry, and John should have been one too instead of a hunter
Dean ended up with the Mark of Cain and died fighting the angel Metatron who was trying to take over Heaven
But because he had the MOC Dean became a demon
Sam cured him but in doing so released the Darkness
Who is really God's sister, Amara
God helped them fight her but then God and his sister made up
But Lucifer got out of the Cage, came back to earth, and impregnated a woman named Kelly Kline
Her son Jack is half angel, half human, but he's just a kid and Sam and Dean and Cas are raising him
They ended up traveling to an alternate universe where they'd never been born and the Apocalypse happened, and they brought back some hunters from that world
And Michael from that world possessed Dean but they're working on how to get rid of him

(Clearly they never got around to telling John about Mary before she waltzed in.)

But what I really want to know is how did they shade John's death to make it sound like he killed Yellow Eyes?

Best I can think of is: "Well, Dad, we got the Colt from Daniel Elkins and there was a showdown with Yellow Eyes...but you didn't make it..." which only leaves a little bit out...

I'd sure love to hear the whole conversation between the three of them...

My 2020 SummerGen story
Title: Man is not what he thinks he is, he is what he hides.
Author: borgmama1of5
Recipient:

Author's Notes: Thanks to my ever-dependable beta and brainstorming partner who gave me the idea for the twist. Title is a quote from Andre Malraux, author of “Man’s Fate.” Bagelcat, I realize Sam might not be quite as badass as sometimes, but there are mitigating circumstances…

Summary: Growing up, Sam learned it wasn’t worth the effort to make friends when you were going to be gone in a few weeks. Starting his third year at Stanford, Sam has an apartment, a girlfriend, and friendly neighbors…

I can’t say exactly when it happened, but over the last few years my brain has made it nearly impossible to just sit back and enjoy a movie or story.

Because even as I’m trying to enjoy the epic space battle or badass fight between the hero and the bad guy, a little voice in my head is going:

“This character has just been stabbed with a foot-long blade, thrown over a cliff, landed on rocks and broken his arm…but when his partner is pushed off the cliff as well, the hero manages to grab his partner’s arm and pull him to safety…” I understand the need to physically traumatize the protagonist to show how heroic they are…but can the limitations of the human body be taken into account just a little?

“They walked into the house in the daylight, there’s been one conversation and no indication that any other time has passed, but now it’s dark???”

“Yes, that spaceship looks impressive, but it makes no sense from a practical standpoint why you would have what looks like miles and miles of twisty corridors that you have to run through to get from the bridge to the engine room…”

What reasonable person would, upon being told the bar they’ve entered is a cellphone-free zone, complacently drop their cellphone into a basket full of other cellphones without asking for a receipt or at least reassurance their phone is secure? I know, the hero needed to not be accessible by phone for the story to work, but come on, there are other, more believable ways to do that!

Yes, I know that these are visual and storytelling tropes to make the story more exciting and that I’m not supposed to think about it…

But I can’t help it.

Would it be so hard for the writers and filmmakers to take a minute to look at their stories from a logical perspective and throw in a line or two so it makes sense given the reality of physics and the human body? Or look at the set they are building with a modicum of consideration for what would be a practical layout and not just put in design elements because they look cool even though they make no sense? (And yeah, I’m looking at those ridiculously complicated spaceships in all the Star Trek movies.)

Conversely, could my brain just shut up and let me enjoy the story without pointing out all the implausibilities???

Of course, I was the kid who, whenever I got involved in a good book, would wonder in the middle of it when did the main character take time to go to the bathroom.

Maybe it’s not such a new problem…

My daughter unearthed the Star Trek Next Generation uniforms I made for her and her siblings back in 1994--so this is the next generation for real!

I found a picture of my daughters in their Starfleet uniforms: 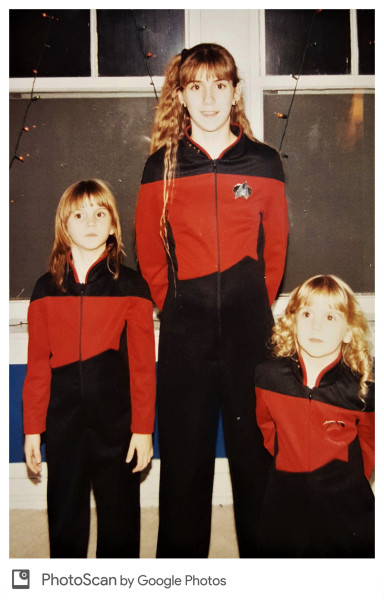 So I thought I was going to shock my daughters...only to be told that this is just the kind of thing they expect from me... 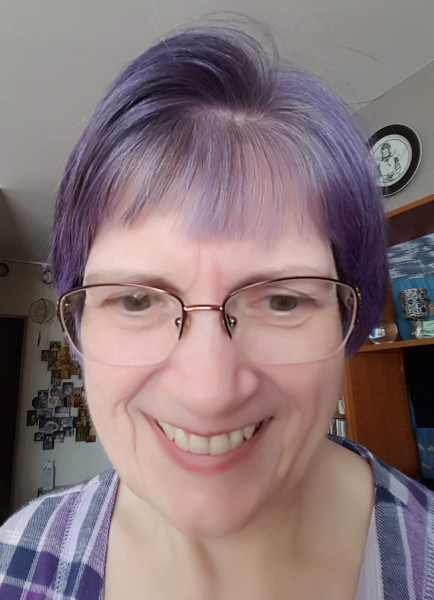 Just got back from 10 days in Heidelberg, Germany visiting my daughter's family. I really hated to leave these sweethearts... 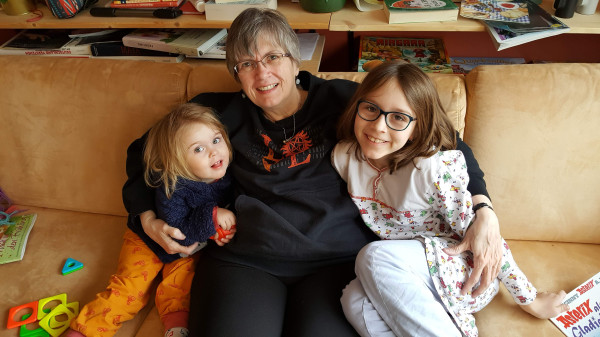 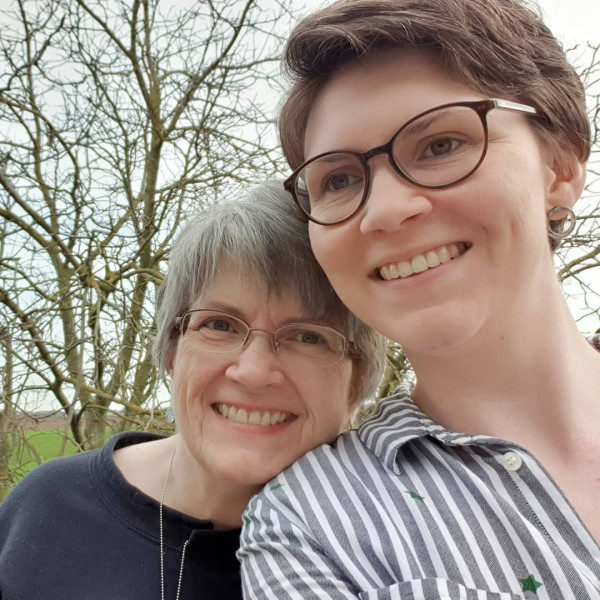 I finally realized what this last season of Supernatural feels like...if you've watched Star Trek Next Gen or later--

You're in the holodeck in an opulent garden. Not only is it visually stunning, but the texture of the ground underfoot and the plants you touch, the scents, the breeze--all combine to convince you that you are in this astounding place. You walk around in it for hours, immersed in the illusion.
After a while (5 seasons or so) you start to notice there are now tiny glitches--barely perceptible moments where the feel of something is just a little off, or when you take a step something flickers and you are taking that step a second time. But you ignore them and keep walking, still lost in the overall astonishment of this holodeck creation.
Now and then you pass a tree and see an incongruity--a snowman, for instance, but it vanishes as you take another look and maybe it was your imagination, you tell yourself.
The longer you stay you start to see patches where the illusion fades momentarily and you can see the gridlines of the holodeck through the flora. At first the faintness solidifies quickly when you notice it, but eventually (say around season 12) the thin patches remain once you spot them.
And they are getting bigger. But you look away from them because you want to keep the beauty of the illusion going.
At this point (season 15) you see places where the the image of the beautiful garden has simply disappeared and the harsh lines of the holodeck stand out to remind you this was pretend all along. You carefully walk a path that keeps you in the garden but while your feet stay in the illusion, everywhere you look you see bigger patches of the grid's reality.
You know that very soon the last of the garden will be gone. You wish the whole thing had simply vanished in one fell swoop so that the image left in your mind would only be of the initial perfection, but sadly the distorted picture will also be remembered when you recall your walk.
-----------------------------
I was trying to explain to myself why it feels sad this year when you see things in an episode that are clearly the writers going 'Dean needs to not have his phone so he doesn't race back to the bunker. Have the bar girl collect it'  and then dash off to write the fun/dramatic scene they want to get to without taking time to think through a logical way for Dean to be incommunicado because they are just focused on the big parts of the episode, having forgotten that it was the solid grounding of the details that made the show work in the beginning.
Collapse